This is a Work in Progress. As the post is updated, it may re-appear in your RSS reader.

Installing the distro was no problem. Booted fine, updated fine, no worries.

Started to look at the audio handbook before getting side tracked with beer #2 and package installation. I do think I found a disconnect between the written documentation and the language (Connection vs Graph) in the most recent version of the software though. 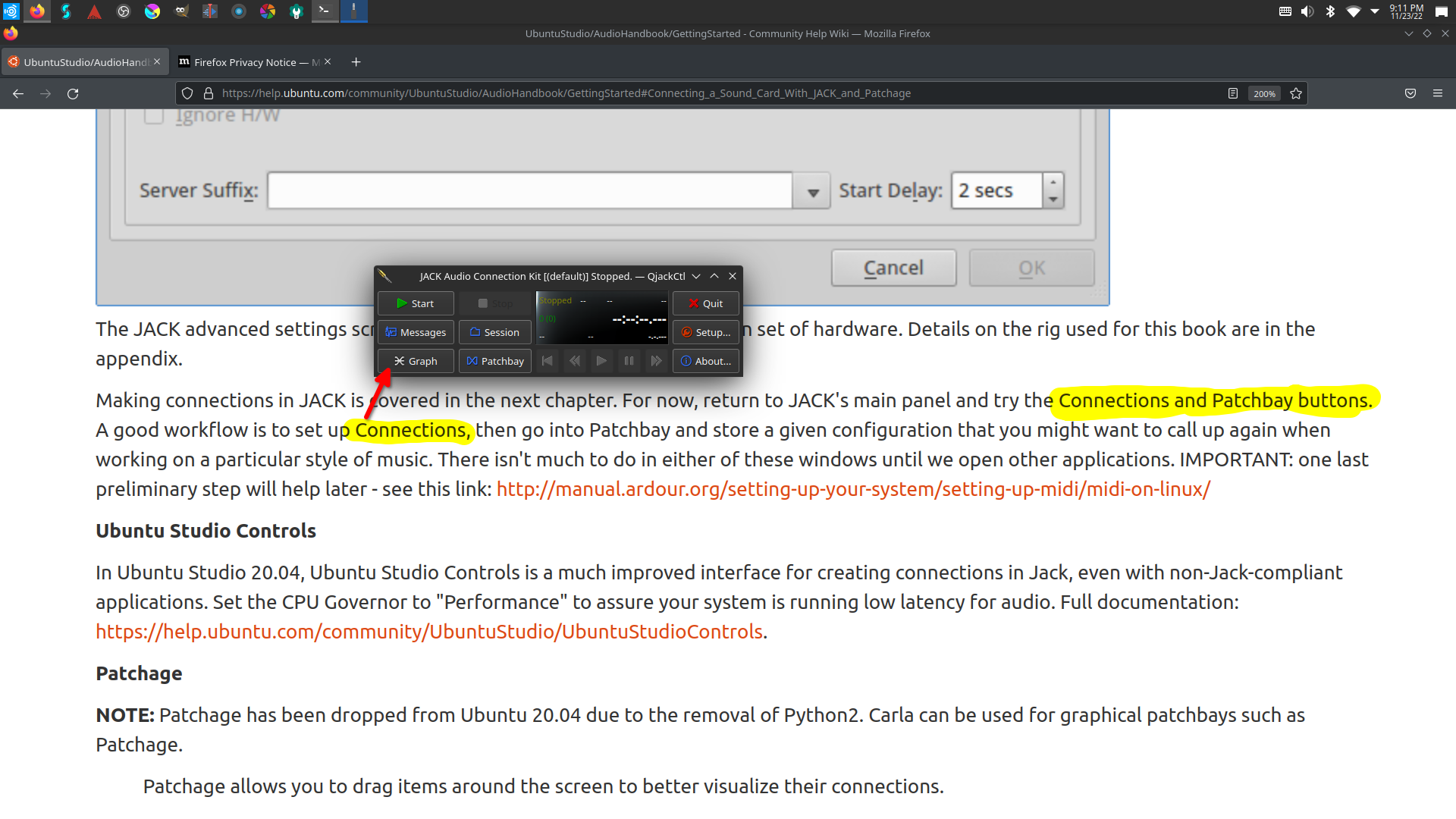 So, things I need beside the base installation packages:

More to do with OpenAI Whisper 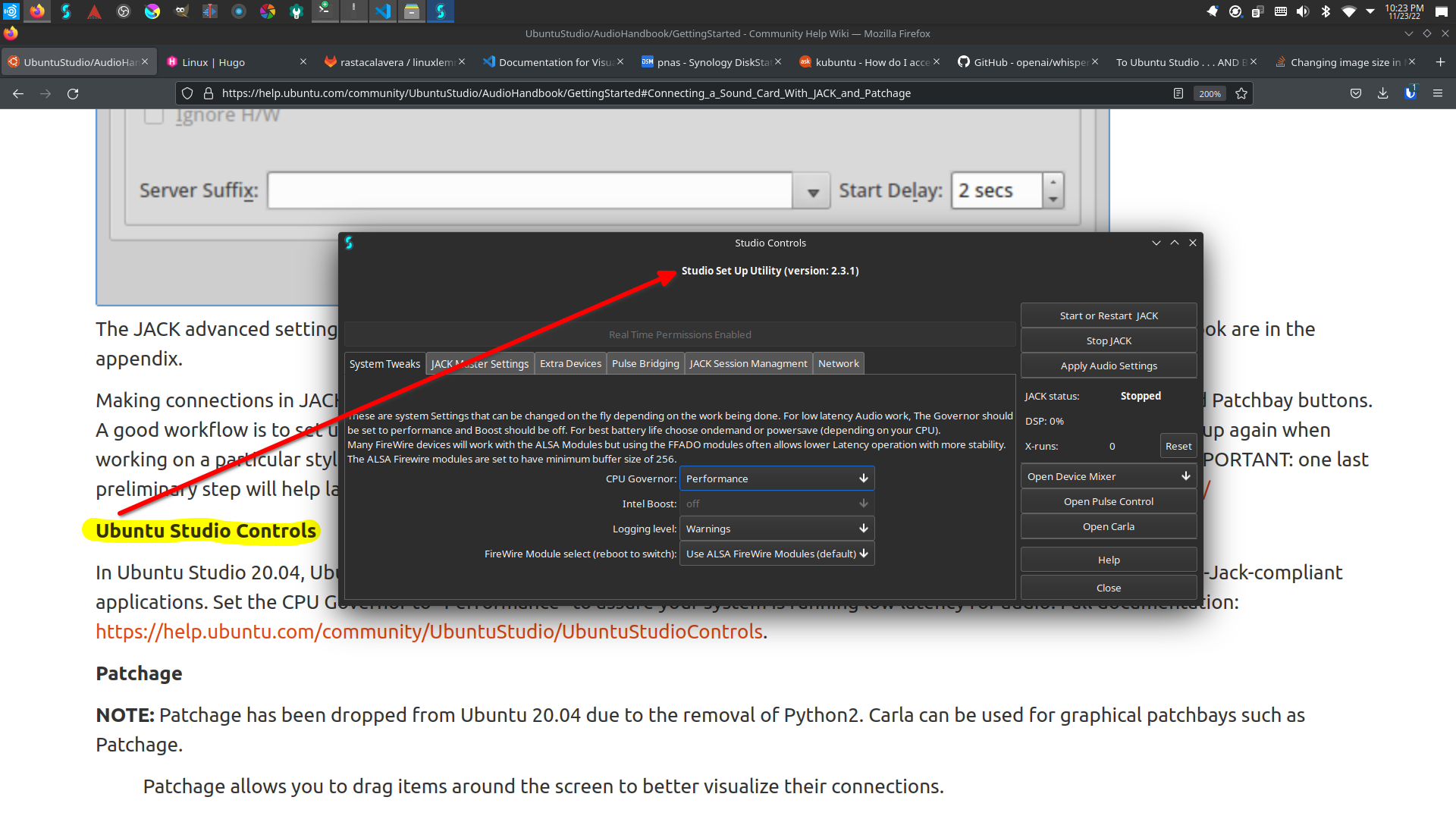 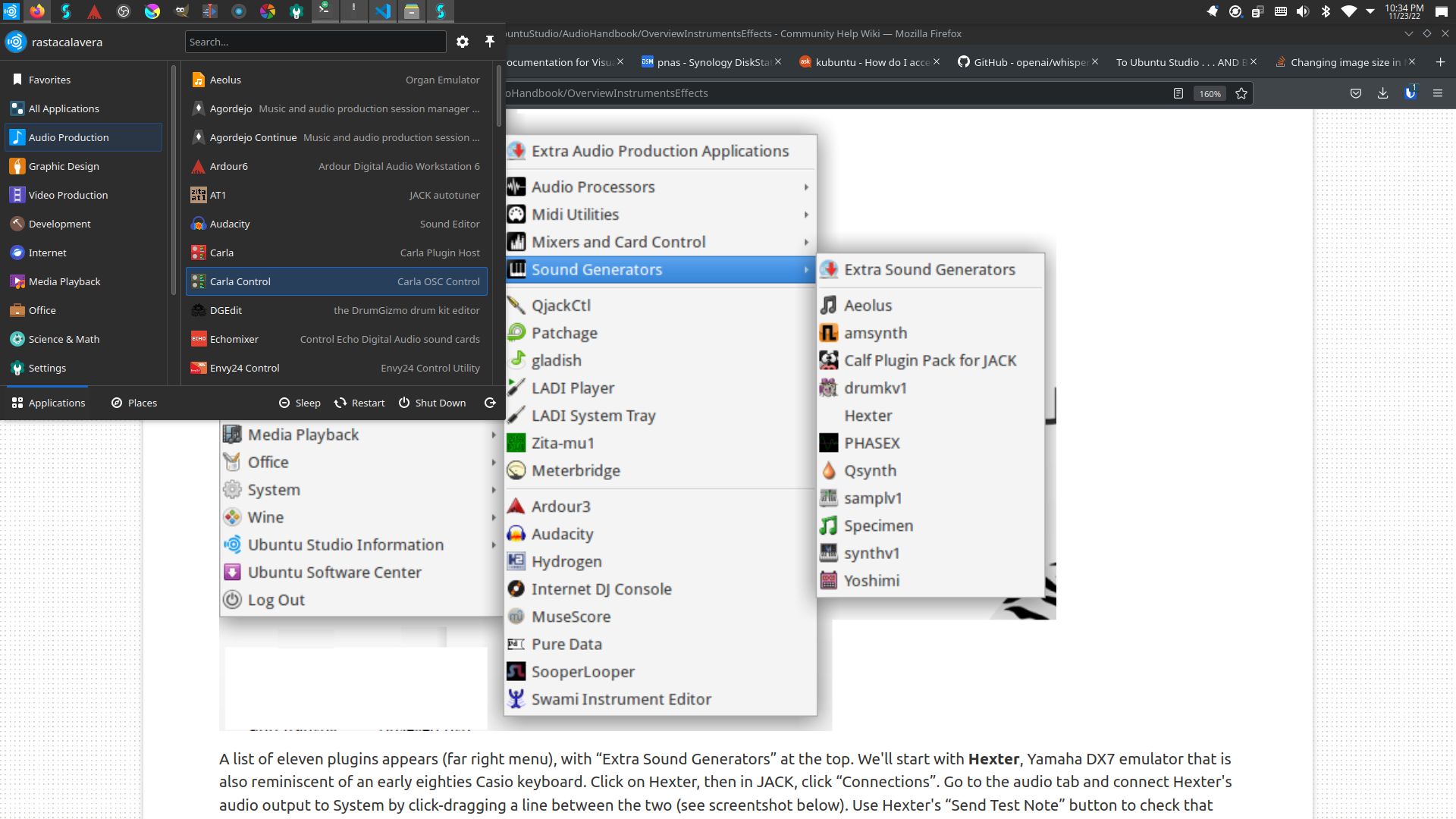 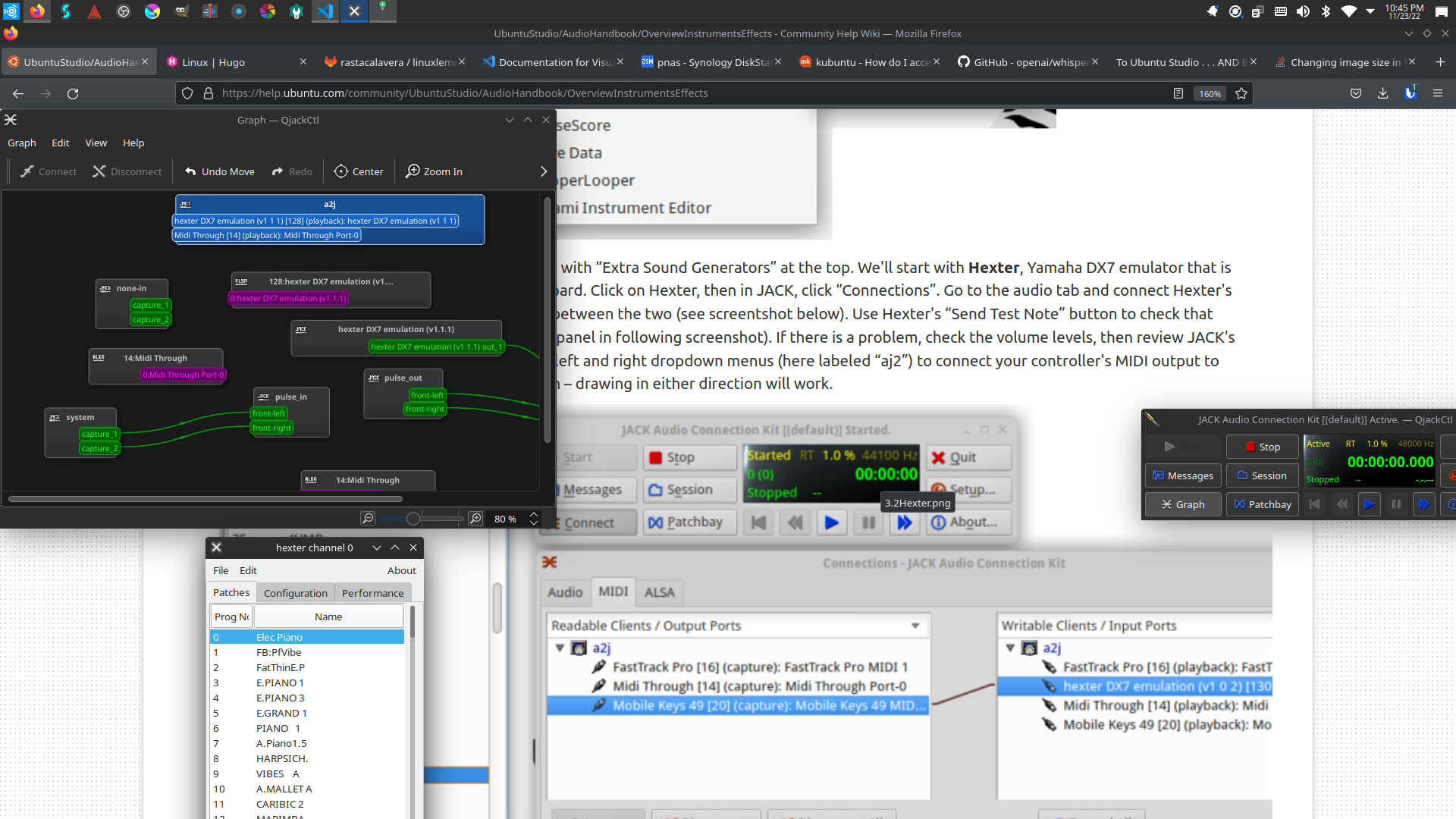 The parade is on the television and I have sometime to explore!

I finally got something to work in the graph view!!!!! 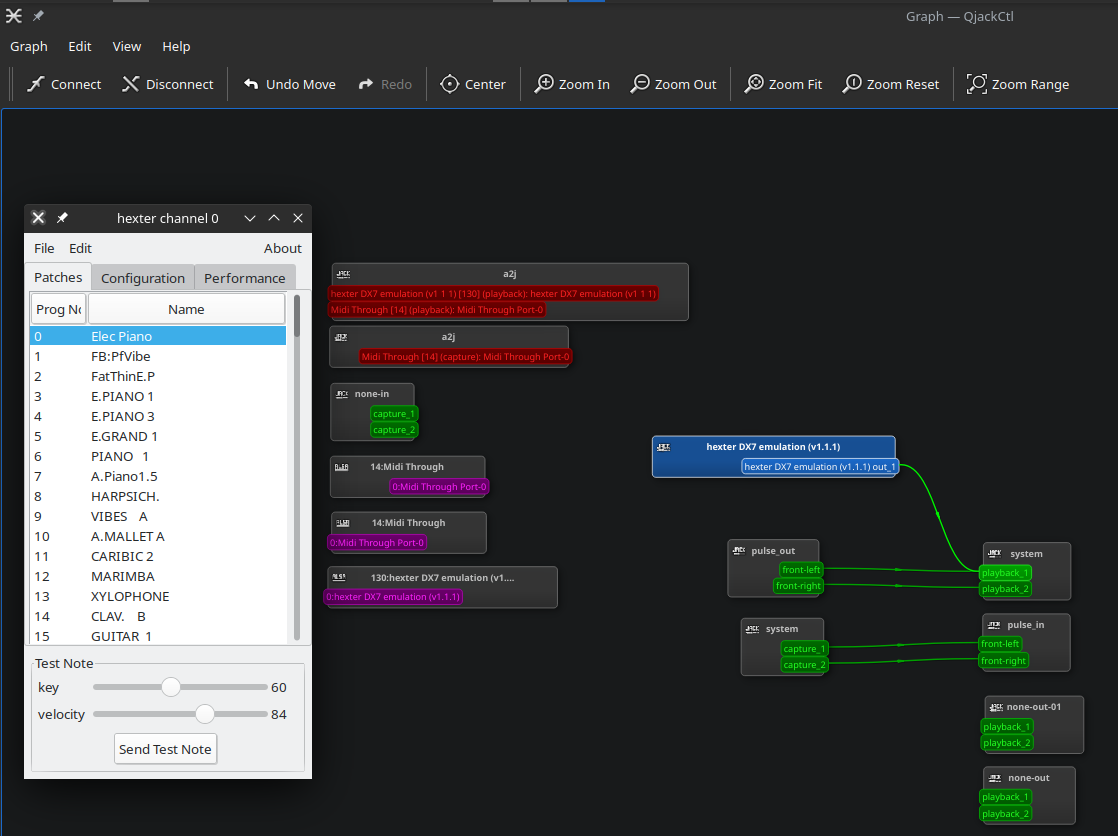 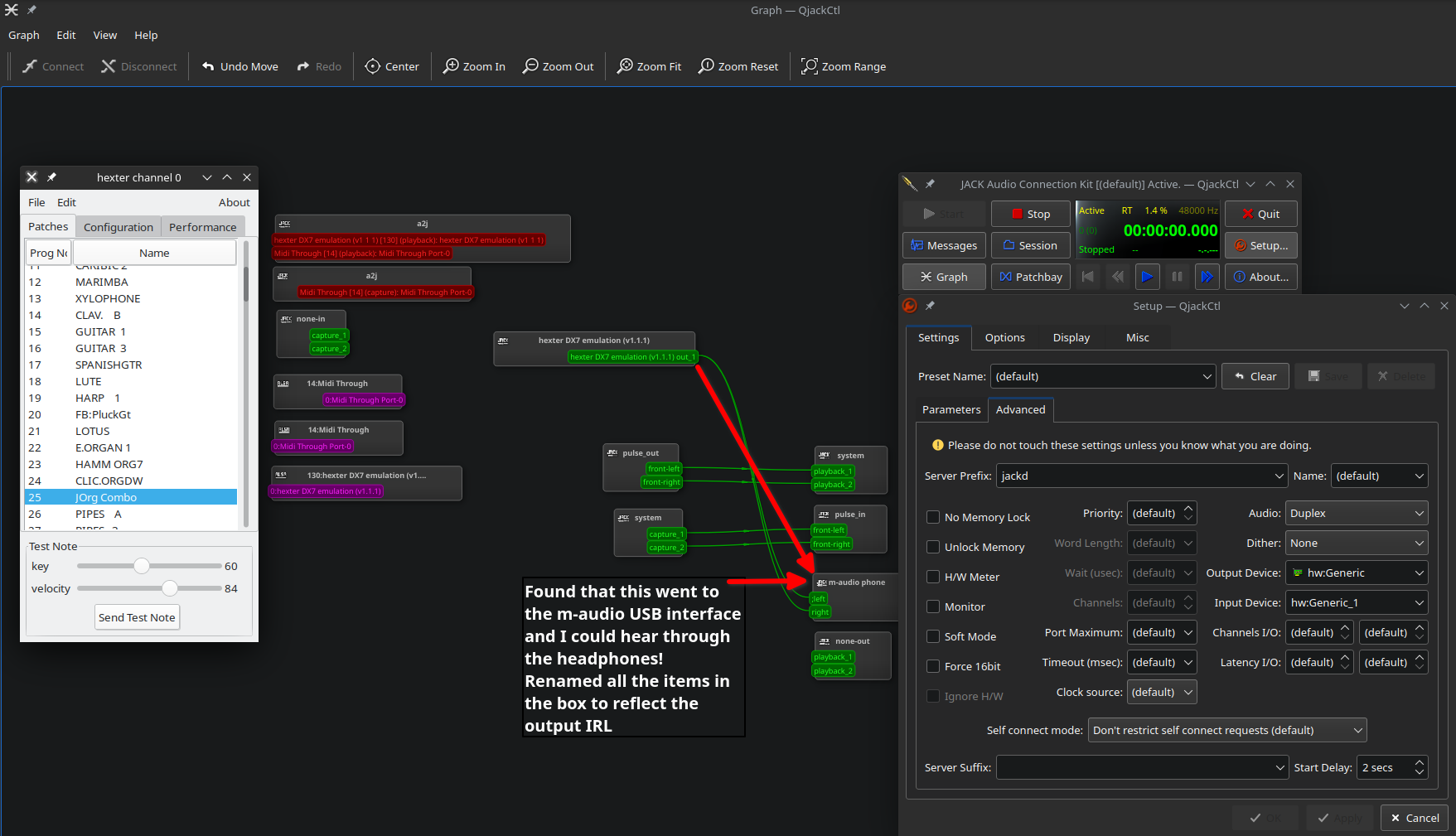 I don’t think Jack is seeing all my laptop or USB interface. On the laptop, there are stereo speakers (output), built in microphone (input), 3.5 mm microphone/headset jack (input/output) and an HDMI port which I assume would be an output only.

I actually have two USB interfaces. One is an audiobox USB interface that has two inputs (mic + instrument) that can be XLR or 1/4 mono or stero inputs. There is also a MIDI in/out on the rear. When I plug this interface into the laptop, QjackCTL only sees the MIDI and there is no way for me to route the two front inputs into the mains of the machine and no way to send the mains into the audiobox for monitoring.

My other USB interface is a M-AUDIO 200F made in 2005. It has two XLR mic inputs, a 1/4 instrument/line input and a 3.5 mm stereo mic input. When I plug this into the laptop, I am able to route the alsa mains into the box and hear it through the head phones but I cant send out any of the outputs.

As I was playing with connections, something really odd happened that made me think it was turning my entire laptop into a microphone somehow. I found a source that was taking in audio and I was feeling around to see if it was my mic, my headphones or something else. When I touched my laptop lid, I almost blew out my ear drums!! The body of the laptop was CRAZY sensitive and just lightly touching it produced tons of noise.

After much tinkering, I finally got a working solution using Ardour 6 and I think I will stop trying to do live recording in Audacity and leave that for adding chapter markers.

I was able to send audio from my microphone into track one of Ardour and audio from a web browser into track two. Now I just need to figure out how to properly do a noise gate and Dyson filter in the Caral rack and I’ll really be making some good progress. Maybe I’ll even try to go LIT again week! 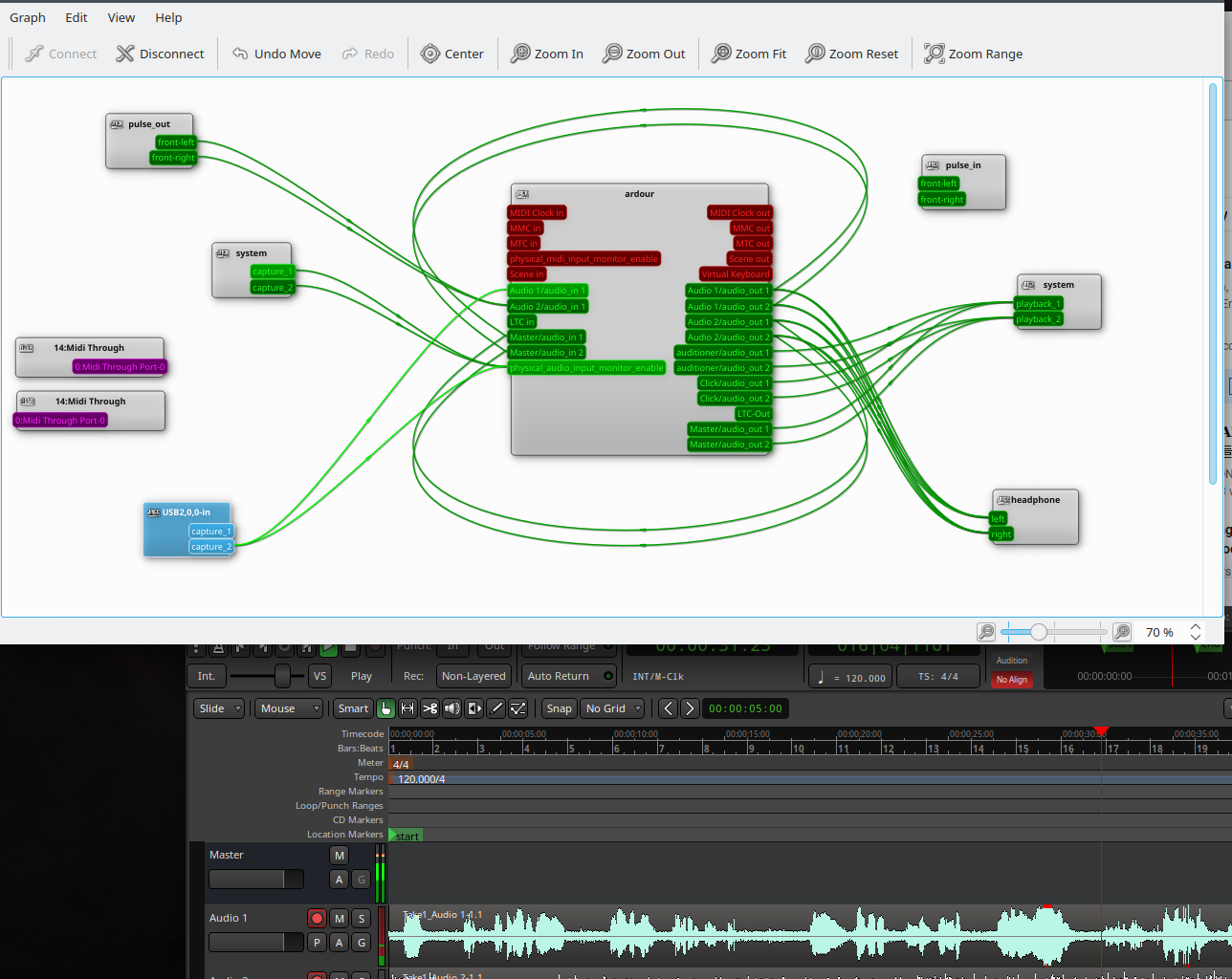